History of The Jukido Jujutsu Dojo

The Jukido Jujutsu Dojo is a proud member of the International Kokondo Association (IKA).

Over a lifetime Shihan Paul Arel tried to identify the key martial arts elements of “power and speed” and “throws and restraints” and blend them with an exacting knowledge of “nature’s own laws of motion.” The outcome – Kokondo. 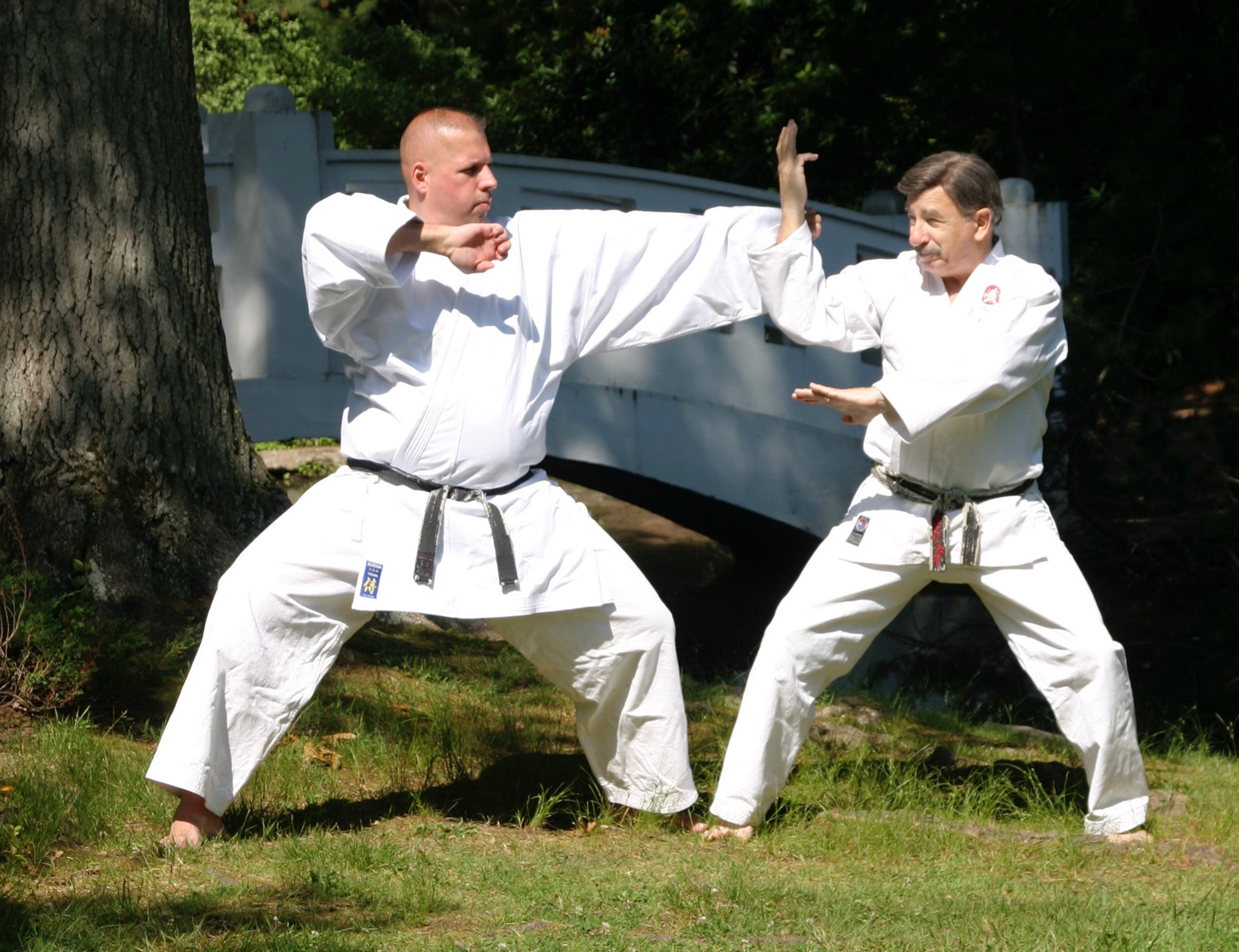 Kokondo (the way of the past & present) is primarily a Japanese system of traditional martial arts developed by one of the foremost pioneers in the martial arts community, Shihan Paul Arel (1935 – 2009). The aim or Master Arel’s life was to synthesize a system of authentic karate and jujutsu and search for solutions aimed at controlling or immediately defeating an attacker(s). Through traditional bujutsu (martial arts, military strategy), he thoroughly evaluated old classical kata and throwing arts for the purpose of maintaining and preserving the fighting methods of past generations. The result is a system of pure fidelity of techniques adapted to modern realities but with its ancient legacy preserved – KOKONDO.

Shihan Arel’s exceptional knowledge and powerful use of bunkai (“analysis” or “disassembly” of fighting techniques extracted from the moves of kata) were organized around the time-tested principles of kuzushi (unbalancing) and jushin (controlling and manipulating the center of the attacker’s movement / orientation). His superb application of these tenets quickly earned him the wide respect and deep admiration of the modern budo (martial ways) martial arts community. His martial arts repertory easily and swiftly demonstrated how he employed “functional” kuzushi as the essence of destroying and controlling an attacker’s center. His highly skilled integration of ancient methods into the context of the modern world was always executed with politeness and safety. These were but two aspects of Shihan Arel’s uncompromising sense of personal honor towards both the martial arts and his thousands of students over a more than fifty-year practice. Kokondo, his system of historical techniques of yesteryear integrated into today’s modern world is the catalyst of so many current respected sensei and masters.

Excerpts from “Sankosho – A Warrior’s Path to Kokondo Martial Arts”

Arel began his martial arts pursuit in 1950 studying Sanzyu-ryu Jiu jitsu with Sudo Sensei in Fitchburg, Massachusetts. Advancing Arel to Shodan on January 20th 1954, Sudo Sensei returned to Japan leaving Arel to promulgate the art of jujutsu locally until his full-time enlistment into the United States Marines in 1956. Sudo Sensei’s legacy of this elite Samurai Class of unarmed self-defense proved so successful for Arel that his initial training and subsequent dan (black belt) rankings qualified him to instruct United States Marines and other military special tactics units. From 1956 to 1962 Arel, an expert in kata, received elite training in Asia and concentrated on fighting styles of karate, judo, aikido and kobudo.

In 1959 Arel was honorably discharged from full-time duty as a United States Marine (official discharge awarded in March, 1962) and returned to Hartford, Connecticut where he opened the Connecticut Judo Academy and the state’s first karate school; Karate, Inc. The style he taught at this time was Sankata Karate and the dojo was a member of the International Sankata Karate Federation. In 1962 Arel Sensei was invited to bring his top students to a special clinic taught by Kyokushin Karate-do founder Masutatsu Oyama in New York City. Oyama personally invited Mr. Arel to affiliate with the Kyokushinkai-kan as his direct student. Shortly thereafter he became one of the first official Kyokushin Branch Chiefs in the United States. 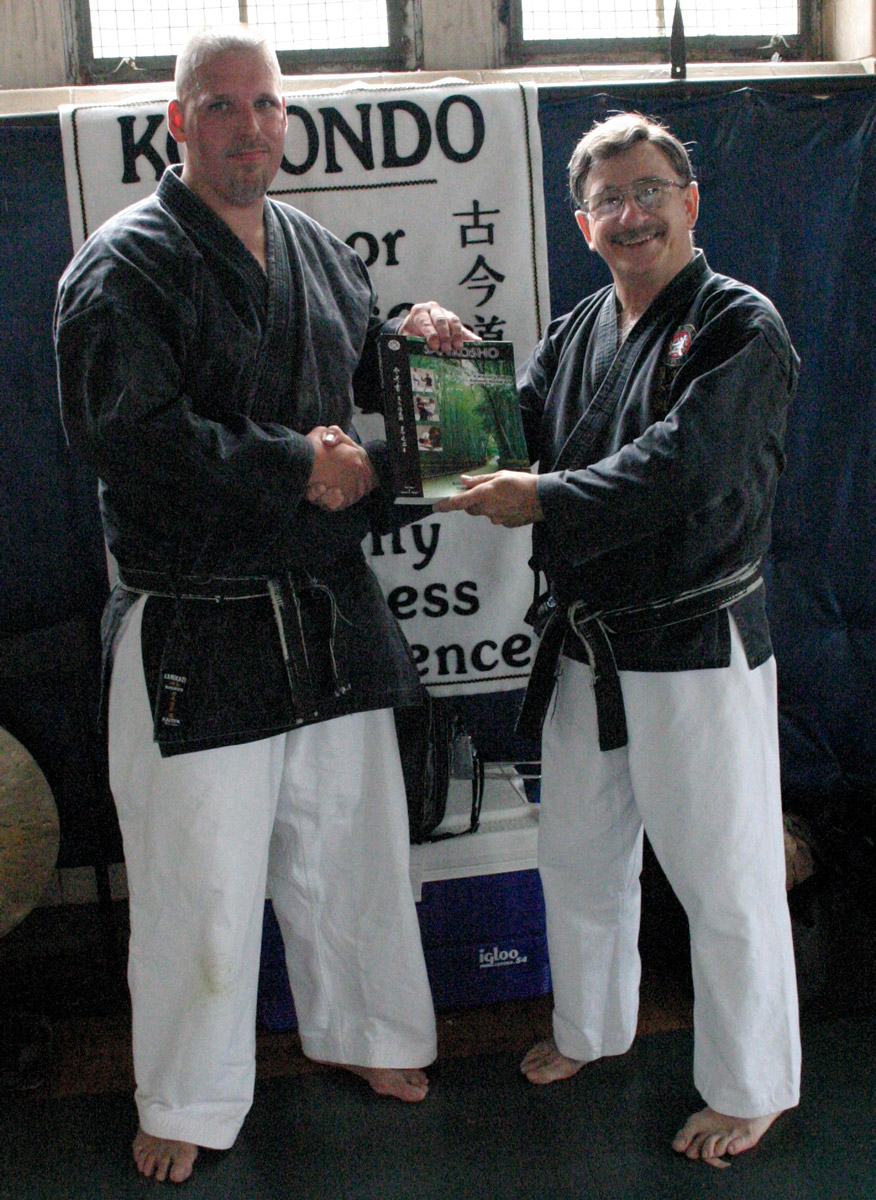 At the 2005 International Kokondo Martial Arts seminar in Bloomfield, Connecticut Robert Sensei (left) with Shihan Paul Arel (right) congratulate one another for the release of their co-authored book Sankosho, A Warrior’s Path to Kokondo Martial Arts.

Shortly thereafter he became one of the first official Kyokushin Branch Chiefs in the United States. In this same year Arel Sensei authored the rules for the First North American Karate Championships held at Madison Square Garden in New York City. He also served as a senior referee with Peter Urban (Goju Ryu) and Don Nagle (Isshin Ryu), including for the final match won by Gary Alexander, an Isshin Ryu stylist and fellow Marine from New Jersey. Mr. Arel then performed on Johnny Carson’s Tonight Show with one of his young Connecticut karate black belts and Mas Oyama.

During this time period in the development of karate in the United States, the first generation of American karate sensei were just emerging, many of whom had recently returned from military service in Asia and were just beginning to teach martial arts for the first time. While Arel Sensei is a proud part of this early generation of karate pioneers in the United States, it is important to note that he entered the Marines as a sensei, and already had more than a decade of experience as a civilian and military teacher of traditional martial arts.

Much of the on-going training during these years continued during frequent regional workouts and exchanges of technique (kokan-geiko) between former Marines such as Don Nagle and Gary Alexander. These practice sessions were very rough and focused on contact kumite and practical applications of self-defense techniques.

A number of notable grates Arel trained with are:

In 1963 Arel hosted the First New England Karate Championships at the Bushnell Memorial in Hartford, Connecticut. The senior referees included Don Nagle, Gary Alexander, Henry Cho and Paul Arel. In 1965 he hosted the Second North American Karate Championships at the Bushnell Memorial in Hartford, Connecticut for which Mas Oyama served as the honored guest and Chief Referee. Other officials and demonstrators included Koichi Tohei (Aikikai Aikido); Maung Gyi (Bando); & Bobby Lowe (Kyokushin Hawaii). Prior to the tournament, Oyama Sensei conducted a large seminar in New Bedford, MA attended by many of the early American karate pioneers (such as Meibukan Goju Ryu’s Anthony Mirakian) and hosted by Mr. Arel’s black belt student, David Shuster. Another historically significant aspect of this tournament is the inclusion of Jukido Jujutsu demonstrations throughout the event. Jukido was seen for the first time by such notable masters as Tohei and Gyi, with Master Arel receiving a very positive and encouraging response to continue his innovative and important work in developing and spreading this unique Jujutsu system.

By the late 1960’s Mr. Arel was recognized as the leading authority on Jukido-Jujutsu. His profound concern for the public’s well-being led him to blend his jujutsu experience with his training in Judo, Aikido and Karate into a dynamic and devastating system of self-defense. It was his training in the sport part of judo and karate that made his awareness of the difference between self-defense and sport more emphatic. He had been deeply involved in both and knew the value of each. When it came to self-defense, there was no time for sport. The rules were different. In self-defense there were no rules.

From 1969 – 1971 Arel hosted the annual International Karate Championships and martial arts shows at the University of Hartford in Hartford, Connecticut. These tournaments received extensive coverage by the local media as well as the coverage in international martial arts publications. The performances and quality of the events attracted competitors from across the United States and abroad representing many Okinawan, Japanese, Chinese and Korean karate styles. Unlike many open tournaments of the era (and since), Arel’s tournaments were noted for impartial judging, without any bias for particular styles or individual dojo. In 1970 Arel Resigned from the Kyokushinkai-kan and in December he officially founded Kokondo Karate and formed the International Kokondo Karate Association (IKKA), later renamed the International Kokondo Association (IKA) in 1983.

To a large degree his resignation from Kyokushinkai-kan and subsequently Kokondo’s resignation from the participation in open tournaments was a direct result of the bias and favoritism that has infested the world of sport karate, and which has no place in authentic Budo.

Training with Shihan Arel was different in many ways than training with anyone else for Robert Sensei. Although an immense knowledge and resource for both Karate and Jujutsu Arel’s guidance was the constant light that forever shined on his students. Robert Sensei realizes the importance of keeping Arel’s personal appeal to forever promote the principles and aspirations that he so desired for Kokondo before his untimely passing in 2009. Arel objected not just to the involvement in cross-training but also to the abandoning of the core curriculum that is the heart-and-soul of any classical martial arts system, the backbone of Kokondo. Although some have abandoned the loyalty to their former mentor and instructor as their own personal decision, Robert Sensei continues to further advance and promote the healthy traditional art of the ancients in the way that he learned it so that it will continue for the present and future generations to come.

“I have to say that as I developed Kokondo, both Jukido and karate, I looked forward to people being able to use the arts as good, reliable self-defense tools. After all, with some modifications, that which I taught in the military could also be used for self-protection for men, women and children in civilian life. And then, as I lived it, I realized that these arts were more than just self defense. Their principles could be used in other ways. So much of what Mr. Sudo taught to us came through…but not for quite a while. Hey, I was a kid! I loved this stuff he taught! This was magic! Wow! Look at that man move! But as I matured, much of what he taught by word began to be an even more important ingrained message…He taught us a way of life!”